The latest releases, features and bug fixes for our CPSM product.

OpsCompass is beginning to roll out Oracle 19c CIS Benchmark support! Users with initial access can now track their Security Compliance status of their Oracle Database Instances within OpsCompass. For more information on installing data gathering scripts, or if you are interested in trying out Phase 1 of support, please contact your OpsCompass representative.

OpsCompass users will be able to view and edit their previously created compliance mitigations and exceptions. The feature also supports bulk editing and advanced filtering capabilities. This feature can be found within the compliance section in the main side menu. 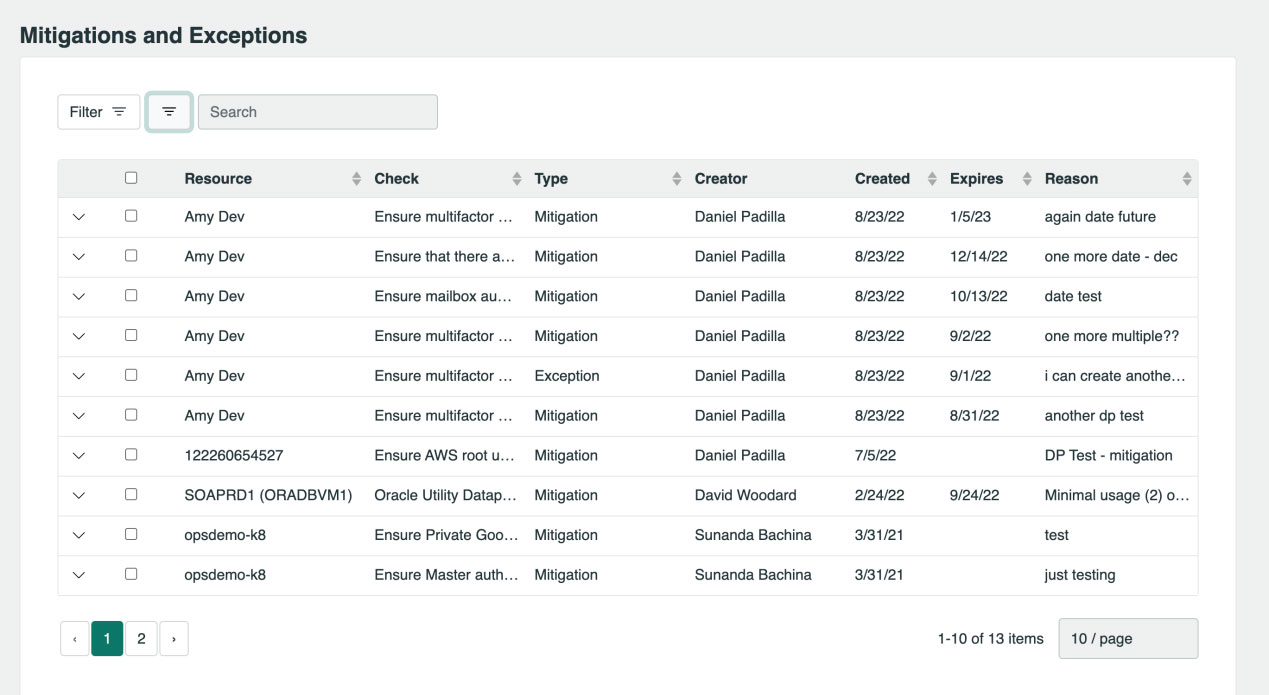 Note: In our next release there will be more filtering options so users can see which mitigations and exceptions are expiring soon.

To support the upcoming addition of Security Compliance monitoring on Oracle Databases, Oracle Database Connections tracked through OpsCompass can now have multiple actions associated with them. These actions allow for the separation of permissions on different users OpsCompass may connect with, or to disable connections from being used entirely. 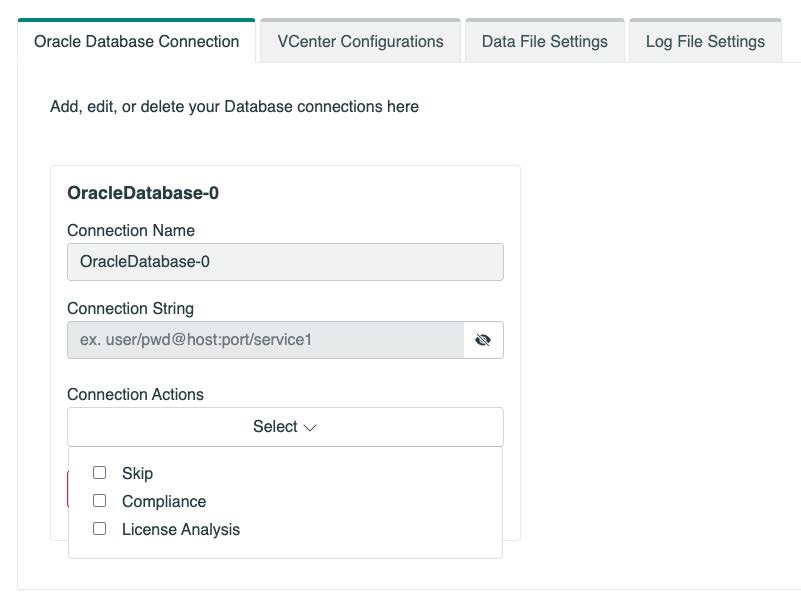 We have updated the license manager display columns and modals to provide accurate, streamlined information.

Added a prompt when a user is not running the latest version of the OpsCompass CLI. 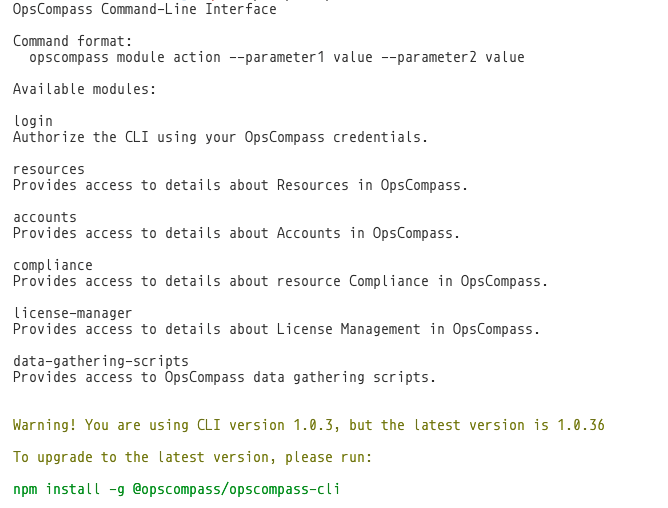 When the Administrator generates an Activity Report, they now have the option to select default date ranges of 30, 60, or 90 days, or define a Custom Date Range. 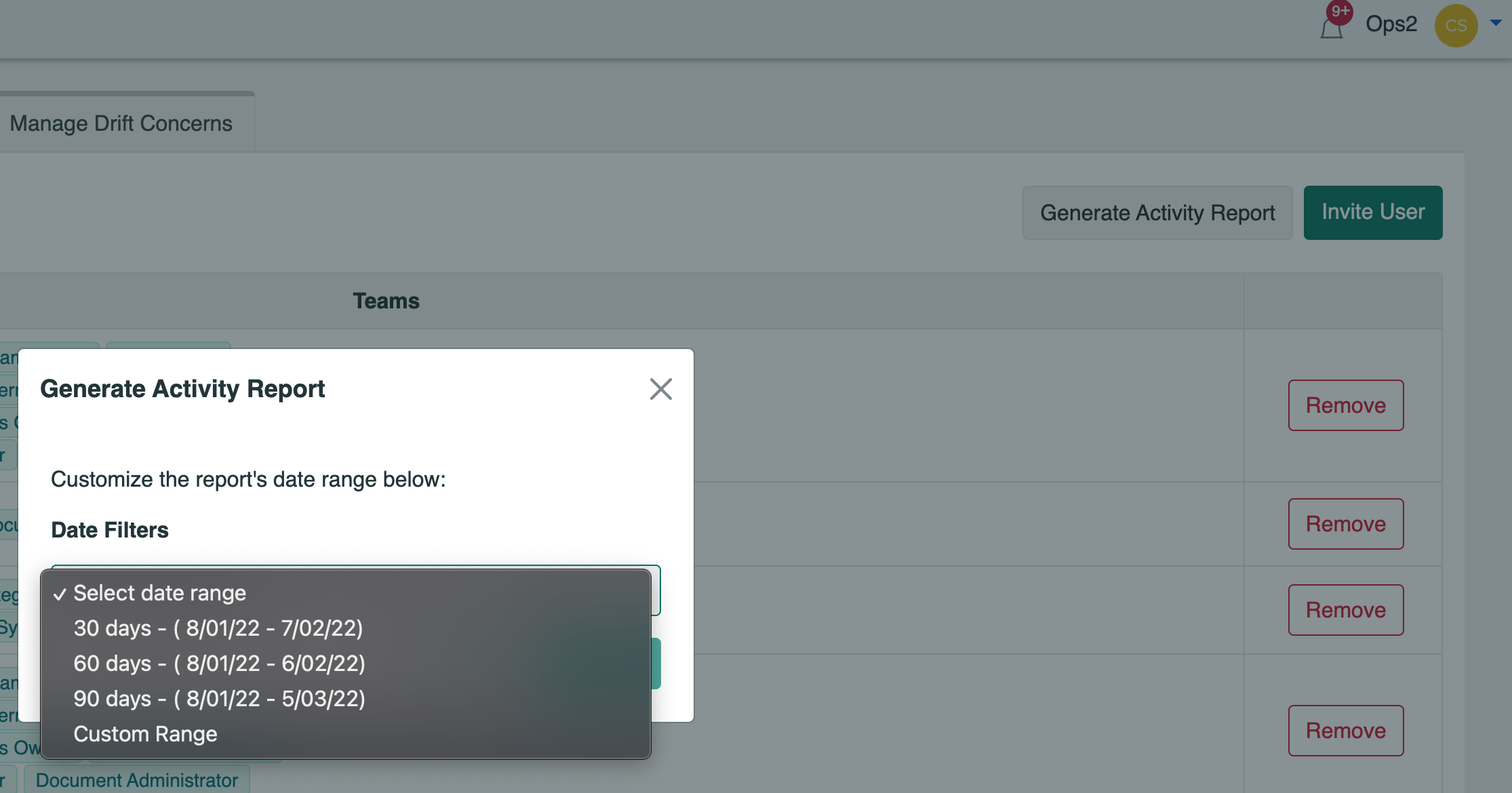 As a convenience, the user can now access the latest Product Release Notes from the Profile menu. 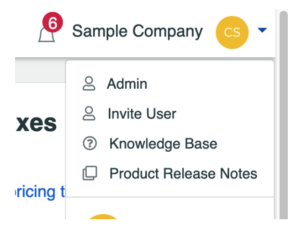 To be consistent with our marketing and branding, there’s a new logo in the web application. As with all brand updates, you may still see old branding in certain places that haven’t been updated yet. 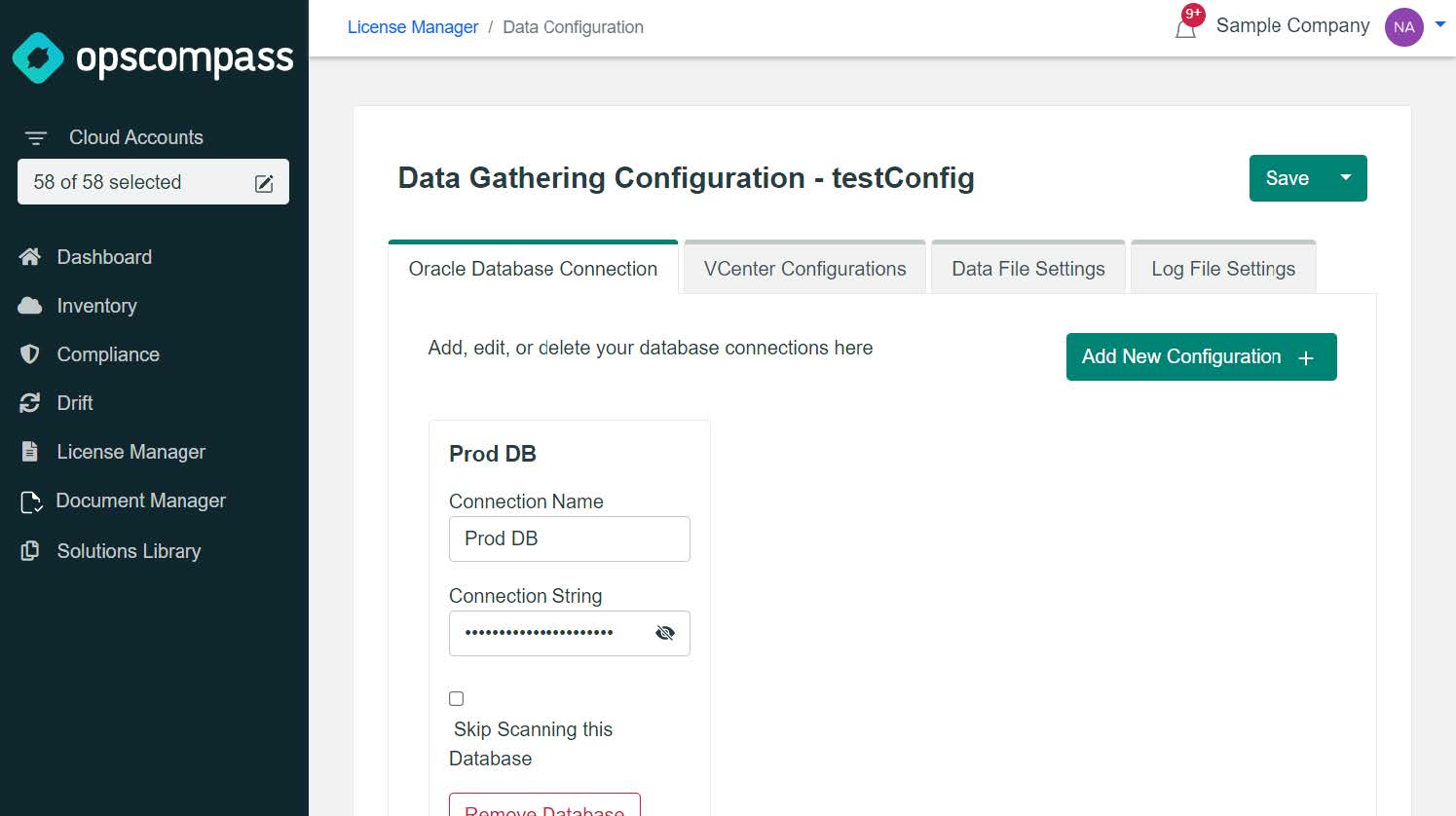 This allows users to provide Oracle database connection strings, VCenter connection info, or modify general settings without logging into the server where the scripts are installed.

Note: These configurations require installing updated OpsCompass License Manager data gathering scripts in your environment. These scripts will be provided at a future time.

These configurations can also be managed through the OpsCompass API and OpsCompass CLI.

In addition to updating the basic layout of the primary table on each of the four report tabs, the three tabs with additional information (Entitlements, License Usage Map, and Deployment Details) now use a “flyout” mode for the additional information. This reduces the need to scroll horizontally and lose context as you click through the report details.

Users who are members of multiple OpsCompass companies can now switch between them directly in the web application. 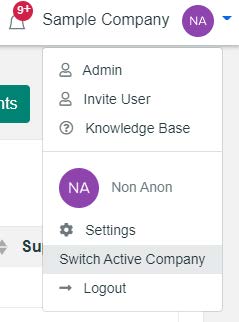 Switching companies this way will take you to the default view of the new company (usually the OpsCompass Dashboard). If a user is a member of only one company, they will not see this “Switch Active Company” option.

When displaying quantities and costs, License Manager Entitlement Manager now renders costs as currency ($1,234.00) and quantities with digit separators (1,234) rather than rendering them as plain numbers (1234). 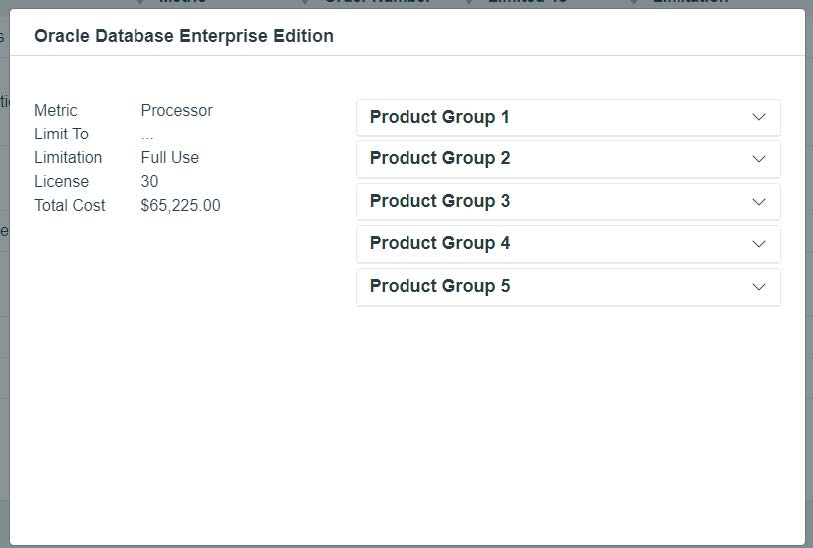 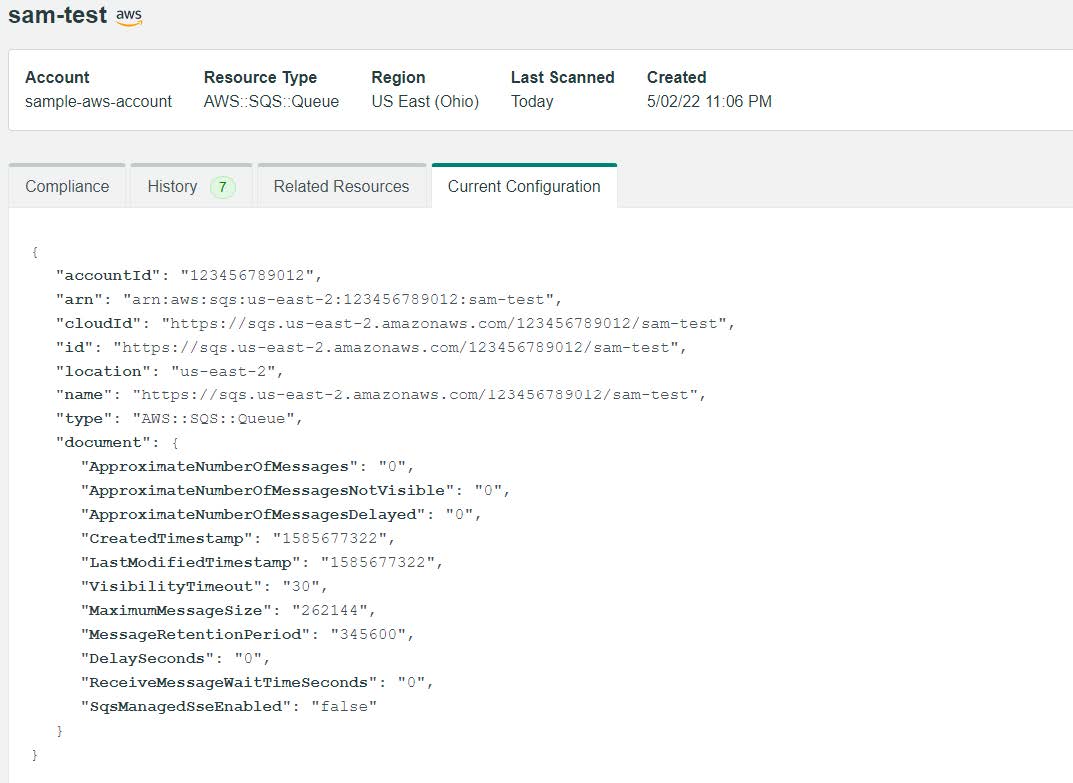 This release of OpsCompass brings new features and some bug fixes for some older features. 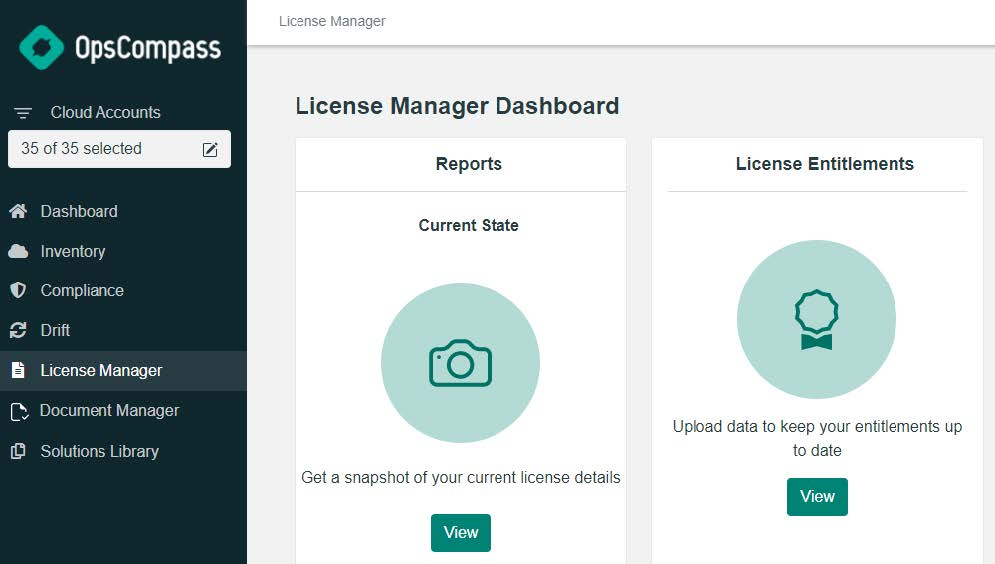 The Entitlements area shows the products you’ve purchased from Oracle, which orders, and how many of the appropriate metric you’ve purchased (processor or named user licenses). It also shows usage limitations and the support begin and end date, where applicable. 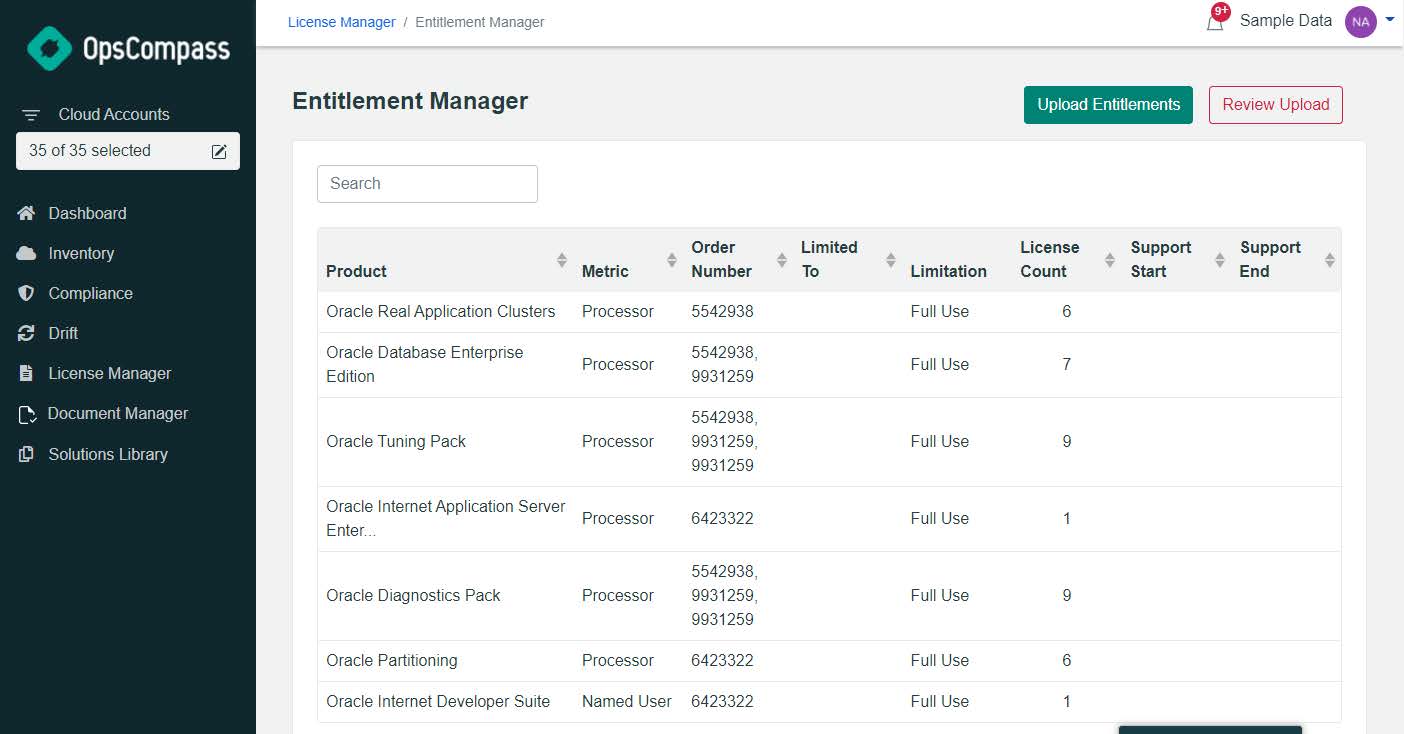 Clicking on one of the products shows the details for that product: the summarized totals as well as the individual orders that add up to those totals. These details can be dismissed by clicking the background outside the details or by pressing the “Escape” key on the keyboard. 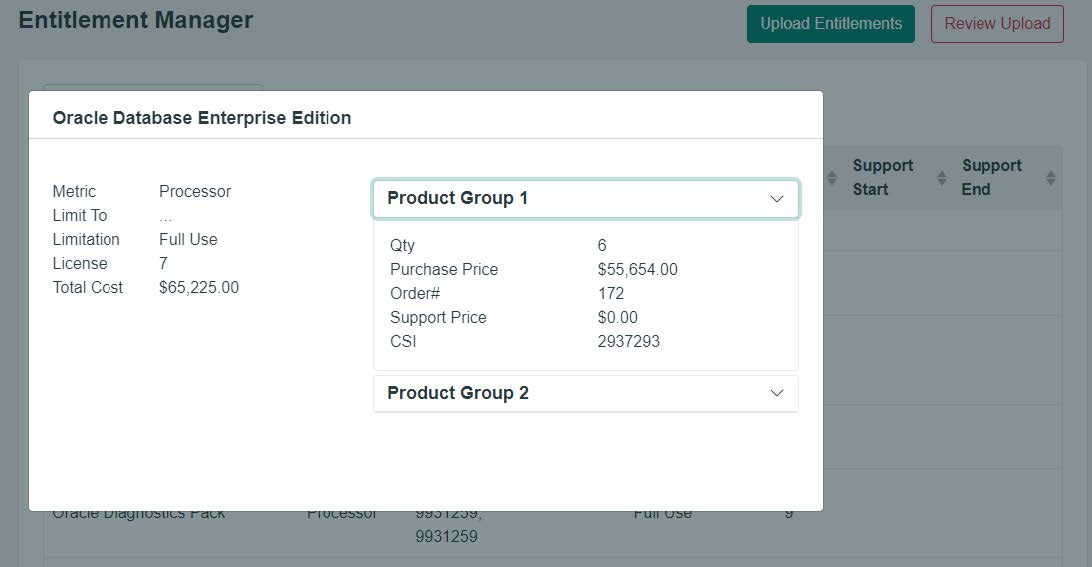 Add new entitlements by exporting your support data from Oracle and uploading the resulting CSV into OpsCompass. Click on the “Upload Entitlements” button and upload your data. 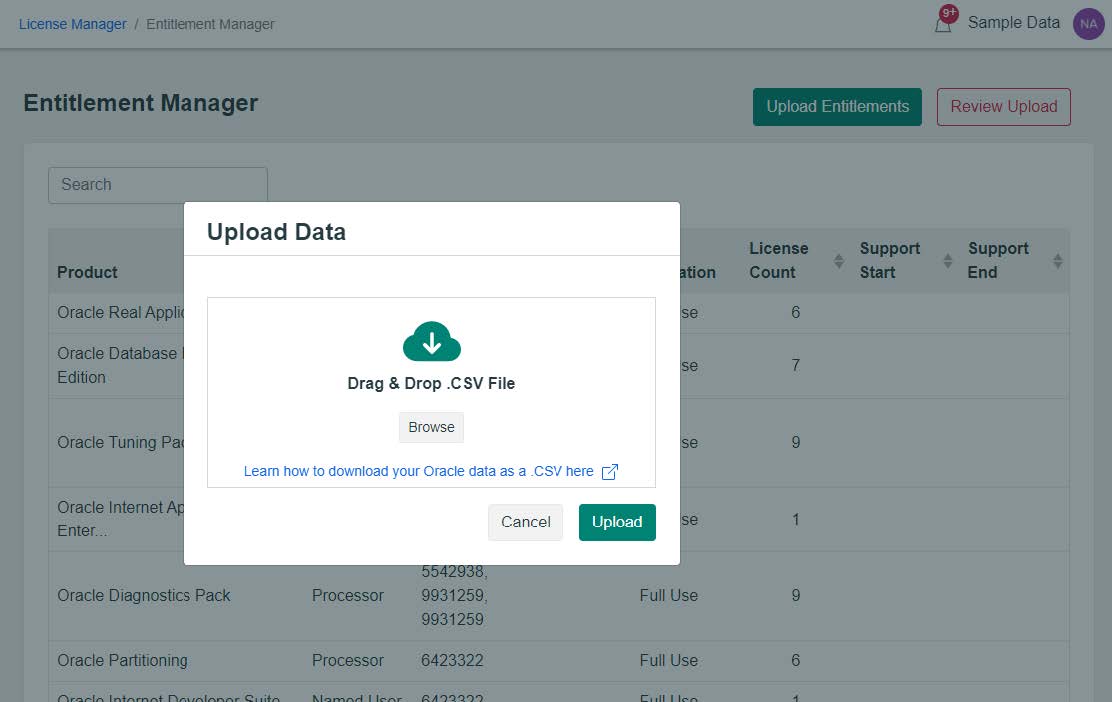 Once the data has been uploaded and processed, you can review your uploaded data from the notification in the Notifications area or by clicking the “Review Upload” button on the Entitlement Manager. 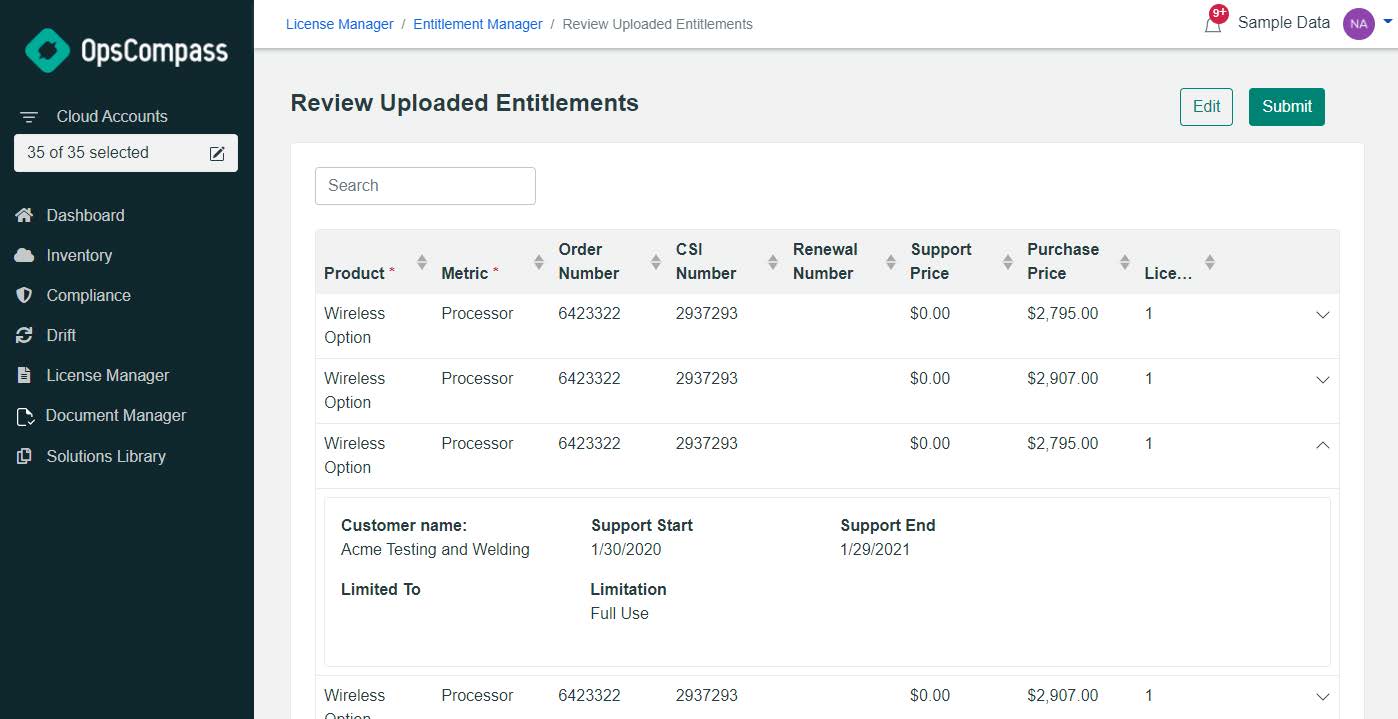 Users can edit this entitlement data before submitting it by clicking on the “Edit” button. This allows users to add data that’s not provided by Oracle’s export or to add additional information found outside Oracle’s system. 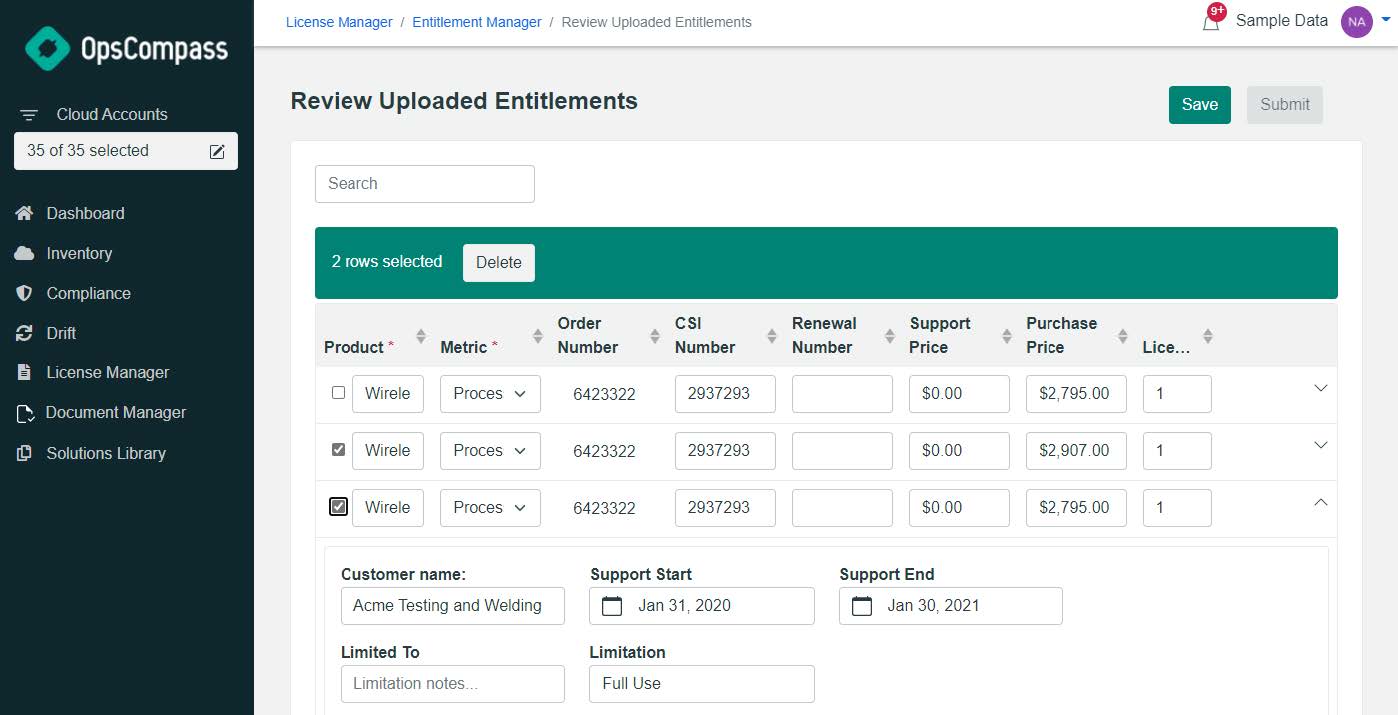 Once submitted, the data will be added to the current entitlement data. Any incomplete data will be flagged for the user to update before submitting.

Users can now sign up for a paid OpsCompass subscription using the AWS Marketplace.

OpsCompass now supports Amazon SNS Topics as a resource type for AWS accounts. This resource type has basic support for inventory and drift, though we don’t currently have any compliance checks for SNS topics. 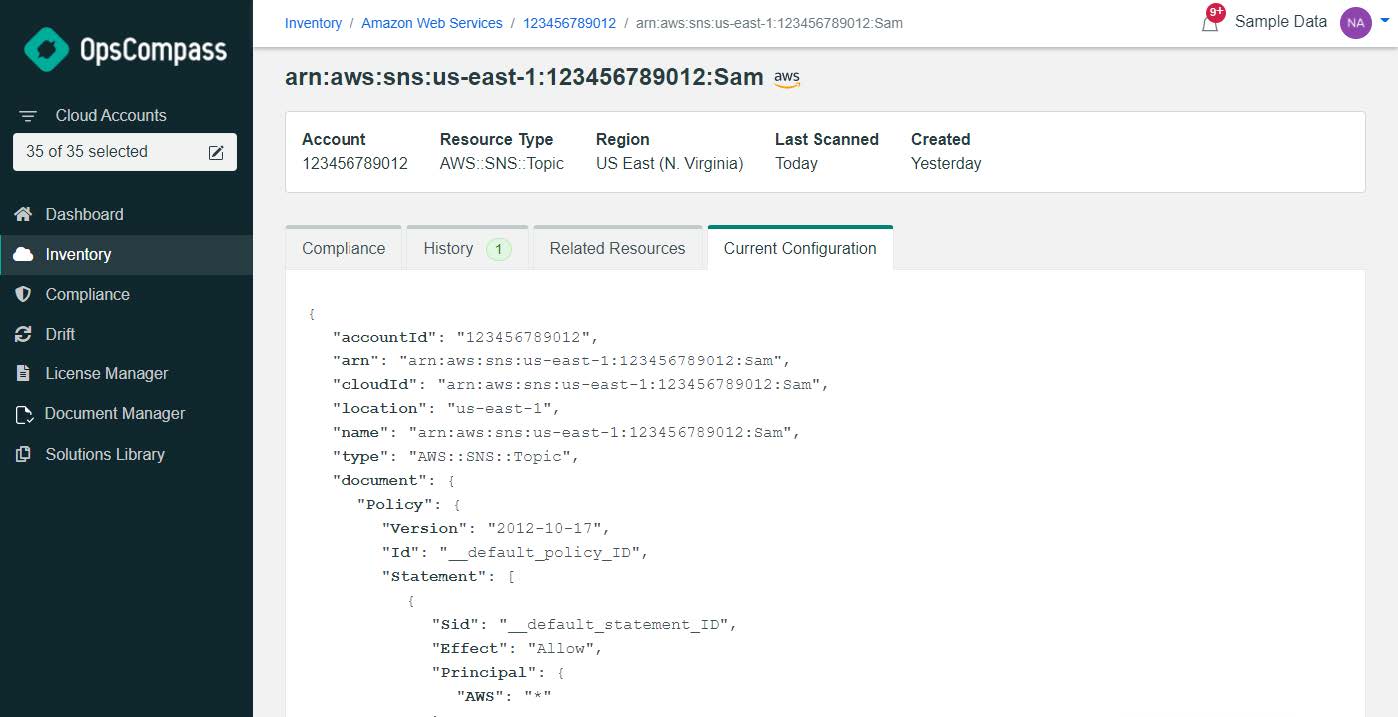 Users with broad access to a company have a more consistent experience on their “Settings” page for the data they can delete. The layout on this page was not consistent before. 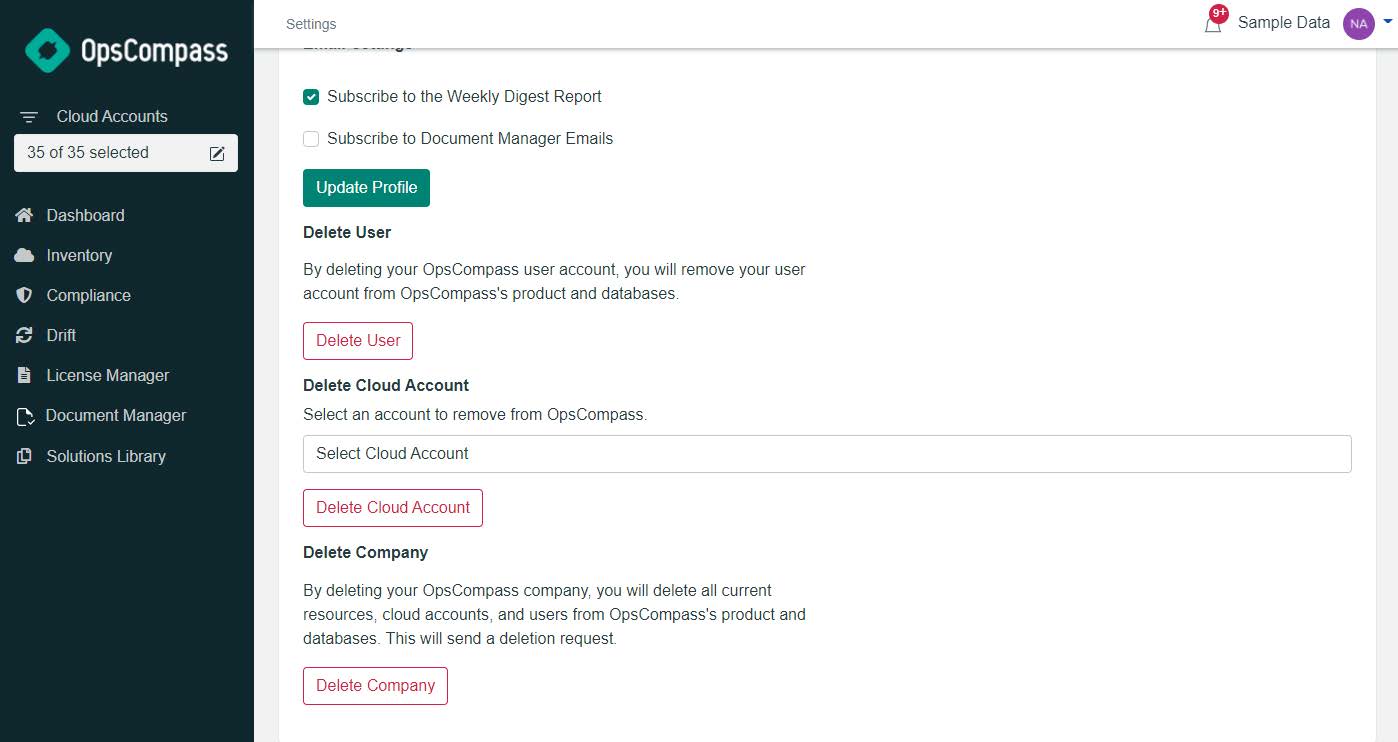 The February 2022 release of OpsCompass comes with a brand-new feature, Document Manager, as well as a variety of other smaller changes to improve the app’s experience.

Before you can upload any documents, you need to create a directory to upload those documents to.

Provide the name of the new directory in the dialog that appears.

Detailed instructions for all the features of Document Manager are available in our Knowledge Base, including detailed steps for managing the documents, generating a report of which documents were uploaded, downloaded, and deleted, and managing access to documents.

We’ve created an activity log for OpsCompass. At this time, the only activities being logged involve the Document Manager, logging creations, deletions, and downloads of documents and directories. You can generate a report from the Manage Users Page.

Over time, additional OpsCompass activities will be logged here.

We’ve merged the Teams, Drift Concerns, and Users pages together into a single “Admin” section.

Once you enter the “Admin” section, you can switch between the areas using a tabbed navigation.